As people check into our resort, I find one of the biggest misconceptions they have is thinking they always need heavy tackle and/or downriggers to catch striped bass. You don’t need either of these, and at certain times of the year, you will do much better on Lake Norfork without them.

What you will need is a good quality rod and a precision reel with a very smooth drag (either bait casting or spinning). In the spring and fall, leave that 20-pound line at home and spool up with 6 to10 pound test low visibility line. Lake Norfork has very clear water, especially during cooler temperatures.

During the spring, when stripers start to move into the shallows, light test low visibility line is a real plus. Using the light tackle allows your bait minnow to swim freely, which draws the striper's attention thereby creating a lot more action. With quality equipment and patience, you can play the striper long enough to land him. You may loose a few, but the extra action is well worth it.

This light line, low visibility method of fishing for striped bass proves very effective on Lake Norfork when the balloon and down rod methods are not proving successful. When striped bass move into the shallows where they are easily spooked by the boat and any unusual sounds, the lighter line works best. There have been many other times when using the balloons is very effective, but there are also times when it is not.  I have seen times when the striped bass feel too much resistance caused by heavy tackle and balloons, and they let go of the bait before the fisherman even realizes he has had a hit. By using the light tackle, you are able to feel the fish sooner, thus increasing your catch.

As the weather warms during the summer months, the striped bass will naturally move deeper until they are at the thermocline, usually between 40 and 60 feet deep. During this summer period, you will need to change back to heavier tackle. Sometimes downrigging with lures proves very productive. Last July, several of our regular fishermen were catching stripers and sometimes losing some very big ones using downriggers.

My wife Joanne caught her first 30 pound striped bass trolling a Long "A" Bomber on downriggers. We have also caught limits of stripers sitting over schools of them in July and August using heavy weights with live shad. Several of our guest fishermen have caught limits doing the same thing during September. I caught my biggest striper (33 pounds) in March on light line with a shiner minnow.  So as I said, you must be willing to change your techniques as the stripers change their feeding habits. I find that each month usually requires a unique way of fishing.

I love to fish and catch bass, crappie, white bass, catfish, and some really good-sized walleye. This past September we caught several walleye on Lake Norfork in the 5 to 8 pound class, and of course, we all know walleye is tops for the dinner table. But, whenever I can, I choose stripers for the most fun and best fight of all. Once you have landed one of these lunkers, as they say, you are "hooked"! They fight so long and hard, that it is very hard for any other species to compare.

Before buying Fish & Fiddle Resort some 10 years ago, I lived in the Chicagoland area and spent many years trolling Lake Michigan. I had my fair share of catching some really nice coho, chinook, lake trout, and steelhead, my largest being a 25 pound chinook. On my first fishing trip to Lake Norfork, I was very skeptical as to how well the striper fight would compare to my experiences on Lake Michigan. Boy, was I ever surprised when I caught my first striper! Their endurance is unbelievable, and just when you think you have him, he will run again, usually 3 to 4 times.

After that first striper fishing trip to Lake Norfork, I made a point of learning all I could about these salt-water-turned-fresh-water lunkers, and feel confident now as to knowing their monthly patterns. When we first purchased the resort, I was spending most of my spare time trying to catch stripers. I learned a great deal after much hard work and shared that knowledge with guests willing to try my ideas. We figured out how to catch stripers!

Now we have established a very loyal clientele of fishermen who come here twice, and sometimes three times yearly. They in turn share with me what has worked for them in catching plenty of stripers. In addition to my own efforts, I have seen what works well for our guests. It is not uncommon for them to come in with a limit of stripers on many occasions. They agree that the key factor is staying flexible!

Coming to Lake Norfork for stripers is a good bet as the lake is one of the best fresh water striped bass fisheries in America. The Arkansas Department of Fish & Game has been stocking Lake Norfork with stripers every year for almost 30 years. The average Lake Norfork striper weighs about 16 pounds, with the lake record weighing in at a little over 50 pounds. Several 40-pound fish are caught each year, and 30-pound stripers are not uncommon. Fish population counts continue to show large, healthy populations of striped bass feeding on Lake Norfork's shad. There are plenty of trophy striped bass here to be caught. The lake never freezes, so you can catch these lunkers year round.

Keeping an open mind and being willing to change is the key to striper success on Lake Norfork. Be flexible. Don’t get stuck on one method of fishing. There are so many times I hear people say, "but I caught a 20-pound fish 5 years ago doing" . . .  they can’t seem to comprehend change.

What are you waiting for? Take out that rod and reel and don’t forget to spool up one rod with light line. Come here to Lake Norfork and hang on for the fight of a lifetime!! 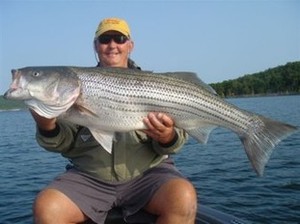