It's 4 a.m. on an April morning, and as guide Russ Breckenridge eases his 22-foot boat up to the dock on Lake Norfork, he silently checks the gear his clients have brought to the landing.

Another guide on another lake might be totally confused. But April on Lake Norfork is a special time. It's when sportsmen climb into their boats loaded for stripers...and for wild turkeys. Norfork Lake happens to be one of the few places where they can do both at the same time and both from a boat.

"We'll just ease up into the creek openings in the boat, give an owl hoot or a crow call, and see if we can't raise a gobbler," Breckenridge said. "It usually doesn't take long. If we hear one, we'll beach the boat, head in the bird's direction, and see if we can call it in.

"As soon as we get our gobbler- or it gets to be mid morning- we'll just go back to the boat, head back out on the lake, look for some stripers working the shad, and have a ball with them.

"And if we don't get the gobbler in the morning, we'll just keep our ears open while we're catching fish. Sometimes we'll hear one gobble in the middle of the day. Then we'll head back to the bank and start all over. That's what makes this so fun-and it can only happen here."

There are reasons for that. Lake Norfork is a 23,000-acre Army Corps of Engineers (ACE) impoundment in northern Arkansas, close to the heart of the Ozark Mountains. An active fishery program has been stocking and managing stripers here for years, producing one of the mid-South's premier sport fisheries.

Anglers come from across the land to match wits and tackle with fish that can push 50 pounds. And there's something else. The ACE and the state manage a series of wildlife units that border the lake. They feature prime hardwood forest laced with creeks, ideal habitat for wild turkeys. The result is a lake with waters that hold one of the area's thickest population's of striped bass, and 540 miles of wooded shoreline that boast one of the region's more robust populations of wild turkeys.

When April rolls around and the dogwoods begin bursting like popcorn across the hillsides, locals like Russ Breckenridge know it's time to start bringing turkey hunting gear along on fishing trips. And they know they're in store for a day of non-stop action.

"You can judge the best time for schooling stripers by the forest," Breckenridge said. "When the dogwoods start blooming, that usually means the lakes water temperature is around 60 to 65 degrees, and that means the stripers are near the surface following those shad. That's when we get to use topwater baits, and it's a whole lot of fun."

"At the same time, it's turkey season. We'll be out on the water and hear those gobblers calling. It'll echo right through the woods and across the water. Sometimes it can be hard to concentrate on the fishing."

Of course, when that happens on Lake Norfork, there's an easy solution: Drop the rods, pick up the calls, and go turkey hunting.

(This article first appeared in the April 2001 edition of Field & Stream magazine. Russ is a full-time fishing and turkey hunting guide on Norfork Lake) 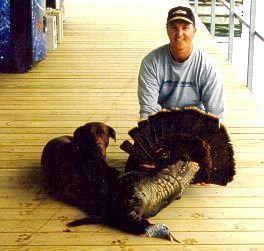